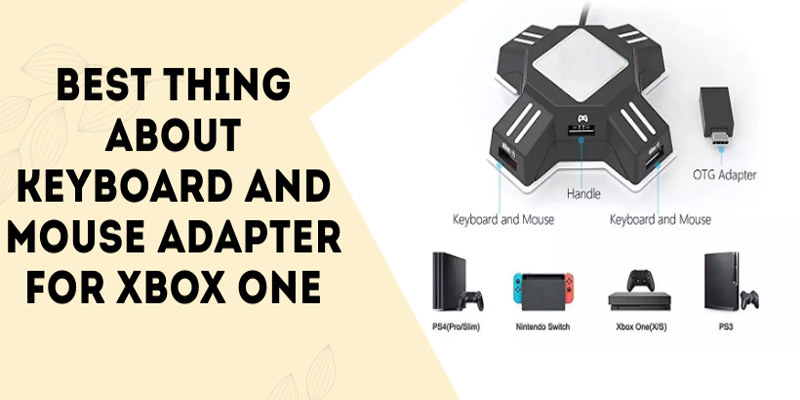 The Xbox One is one of Microsoft’s most esteemed pieces of hardware ever designed. Launched as a successor to the older Xbox 360, the Xbox One’s controller comes with a redesigned body, a responsive D-pad, and directional haptic feedback-delivering trigger buttons. A professional version of this controller also exists, originating with programmability prospects and interchangeable components. However, these controllers are not for everyone. It doesn’t matter how upgraded and convenient some controllers get because some people can’t simply get used to the various controls. That is why some still prefer to go old school with a keyboard and mouse. So, are you also among those people who’re looking for the best keyboard and mouse adaptor for Xbox one? If yes, buy from Esource Parts known as the leading supplier of Xbox accessories in Canada.

Esource Parts is an electronics supplier that can provide you with your ideal keyboard and mouse adapter for Xbox one at an affordable price range. There are many advantages of purchasing this adapter. Nonetheless, you need to know how this device functions before you can get your hands on one.

How Does It Work?

The Xbox One gaming console’s default design was to function with an Xbox controller. However, a keyboard and mouse are better in some games. Setting up these accessories on your console is a fairly straightforward process. All you have to do is choose your ideal Xbox keyboard and mouse adapter so you can get to work. Once you have your adapter and your PC opened alongside that, you need to follow a few steps.

The advisable thing to do is wirelessly connecting your phone to the adapter. In this way, you can keep the Xbox keyboard and mouse adapter connected to the console while you’re loading all the profiles. There are a few more necessary steps to go through before you can jump to the gaming part.

Once the connection is successful, you are good to go. Download profiles onto the adapter according to each game you play for the best possible experience.

The best advantage of using a keyboard and mouse adapter for Xbox One is indeed self-explanatory. The use of a mouse and keyboard offers more precision and accuracy in FPS gaming, without any expenditure of directional turning and mobility. On top of that, the games that are compatible with the adapter have optimizations to ensure fair match-making. This feature means that you will not draw up against controller players, which would have been an unfair advantage if that was the case.

Moreover, the addition of full mouse and keyboard support on the Xbox One could drastically change the time it takes for developers to release some games. Some high-end games don’t hit the stores for lengthy periods because developers have to redesign the user interface and controls. This total do-over then has to be programmed onto the few buttons of the controller. If the Xbox keyboard and mouse adapter have a successful integration, the same developers can release the games without worrying about controller inputs. You could then easily tweak the control settings of that particular game according to your preferred keyboard settings.

The adapters for Xbox One are more multifunctional than you may think. They can also support accessories such as steering wheels and flight sticks that give a more realistic approach to the vehicular games available on the Xbox.

The benefits of the Xbox keyboard and mouse adapter extend beyond just gaming purposes. If the Xbox were to attain full mouse and keyboard support, non-gaming UWP applications would be accessible on the console. For some people, the Xbox would become a hybrid productivity machine that could jump between various applications. A potential increase in the approval of this format could occur.

The debate on the wireless controller versus keyboard and mouse adapter for Xbox One is never-ending, especially amongst those who have a preference between the two platforms. Contemplating between the two gaming setups is understandable as both of them have their ups and downs. Researching before you invest your money in anything is a smart move. The things that work for one gamer may not be the case for another. Nonetheless, it is undeniable that the adapter has opened up a world of possibilities for the Xbox. If you plan on picking up one of these high-quality adapters for your console, be sure to swing by Esource Parts for the best possible deals!